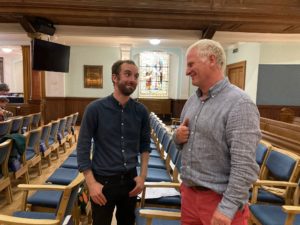 After being one of the Founders of the RTO, over 20 yrs ago, and leading the RTO to ever greater heights, Sir Richard is handing over the baton to Michael Graham from September 2021.

Sir Richard will be missed but after all that effort he deserves a well earned rest.  He may yet make cameo appearances so watch this space!

Michael helped hold the Orchestra together over the last year, taking the regular RTO lock down rehearsals, on Zoom. He did so well – with patience and constant reassurance that we were playing well –  that we asked him to carry on this year. All players were muted while playing on Zoom. How Michael knew that we were doing well will remain a mystery and beyond the comprehension of the players.

The RTO is very happy to announce that Michael has accepted our offer to become our principal conductor .

The £1,000 winner was Edwin Sung, with the Celtic A Wee Big Irish Scottish Jig. Choosing a runner-up from some fantastic compositions was impossible, so we had 4. See here for details.
We have 5 terrific pieces of music to rehearse and play in a special concert next Spring. Watch the website for details.

The Really Terrible Orchestra will be returning to play at the Fringe Festival on Saturday 15th August 2015. Tickets will be available from an orchestra member or edinburgh fringe box office shortly.

Programme will include newly commissioned music, Challenging pieces by Greig, Beethoven, and Rossini.

Alexander McCall Smith in conversation during our debut concert at Glasgow's City Hall on 13 October 2012.

You can find more images about this unique event here
Photography: ©Alex Hewitt.

Five-star the RTO continues to lead the revolution for the musically disadvantaged with its unique musical interpretations. A triumph that proves bad is good. With its blend of humour, musicality and lack of technical prowess, the players surge through a lively programme taking the audience with them, creating a wave of excitement and hope that nothing will go wrong. The RTO never disappoints. 'These musicians who are dreadful are always a hot ticket. How can that be?' (ABC News) MORE

Click on the image to view the Glasgow Gallery.